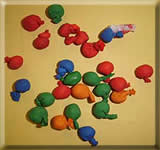 Earlier in the movie, Eric Stoltz's character asks "I'm all out of balloons, is a baggie okay?"

Now I am no drug expert but am I to infer that heroin is supposed to go into a balloon and cocaine into a baggie? And Mia Wallace thought that was cocaine and that's why she overdosed?

A friend of mine who knows a lot more about drugs than I do said that's not true, but what do you guys think?

That's interesting, but I always assumed that Mia snorted the cocaine because it was white and she just assumed. People jonesing for a coke fix will probably assume that any white powder is cocaine, although it can be tweek, ketamine, or in this case china white heroin. I am not a big druggy, but even I have taken one thing thinking it was another, so its gotta be a quite common phenomenon.

The problem is of course the active dose of heroin is much smaller than the active does of cocaine, so she took too much and overdosed. Also she had been drinking. Heroin and alcohol is not a good combination... just ask Jim Morrison who most likely died from doing heroin after a night drinking in Paris.

Q: How can you tell if a junkie is lying?
A: His lips are moving.

July 24, 2013
Yes, it has been common for heroin to be portioned out into a balloon, but it's pretty uncommon for you to find /that/ much in a balloon.

The amount (about "an 8-ball" in coke terms) that Vincent bought is more inline with a cocaine stash, rather than with heroin.

You might have noticed that Vincent rolls his eyes when Lance tells him that he has to get into his personal...that could be a reaction to what a small time dealer Lance is (the type who would use balloons), or Vega thinking he's heard that line 1000 times before.

Like so many of the things that make this movie great, it's up for you to fill in the blanks.

August 18, 2013
vince was spending big $ on heroin...$1500 if i remember correctly...an 8 ball or 1/8th of an ounce of coke would never go for that much...an 1/8 of an ounce of heroin is a TREMENDOUS amount for personal use...this was obviously high grade smack based on the price...lance is offering to go into his own "stash" as an attempt to seem like a good guy who considers vince his friend b/c a dealer's stash is never cut...he would have a 100% pure product for himself as opposed to the cut product he keeps for "custies"...why the balloon? if vince were to be stopped by the police and had that much heroin on him he would go to jail, no doubt ...however with a balloon he could pop it in his mouth and swallow it for retrieval at another time (perhaps after he is bailed out on a minor offense)...however, a plastic baggie would degrade quickly in his intestines due to gastric acid and he would die of an overdose...

January 28, 2017
THAT'S NOT TRUE. Both drugs go in either. It depends on your dealer. If youre going through the mexican cartels in the sw US you will find they put everything in baloons for human consumption in the case of a bust. Or for storagr in cavities when crossing the boarder. Depends on your location and source. That being said I think she did mistake heroin for cocaine and almost died.

January 28, 2017
I am not ashamed to say I used to use heavily. Never stole for my habit. Believe it or not some drug adicts have morals. Anyways, I used to use abt 1/8 every other day. Thats only 3.5 grams. I guess that is a lot. But definitely not unheard of by any means.