The Gold Watch story in Pulp Fiction, an In-depth Analysis 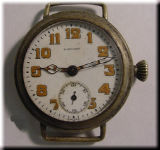 Rob Ager, the film critic behind collativelearning.com gives an in-depth analysis of The Gold Watch scene in Pulp Fiction. He uses video and narrative to build a case that much more symbolism and story is being transmitted than first meets the eye.

Anyone with more than a casual interest in the film will appreciate Mr. Ager's analysis as it will give the viewer even more to think about during subsequent viewings of the film. Nicely done!

Pulp Fiction Analysis of the Gold Watch segment from Susan Hillabold on Vimeo.