Whatever Happened to Mr. Pink? 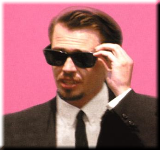 At the end of Reservoir Dogs, Mr. Pink seems to disappear out the door without a trace. All the other Dogs lie dead (or quickly dying) and only Mr. Pink escapes out the door. I had always assumed he gets away! Am I wrong? Please help!
Aurthor: Pulp Date: September 18, 2007

Well he did get arrested... at least according to Mr. Wowie Zowie in his forum post on God Among Directors...

Okay, I've read the FAQ, I've done my homework, now it's time to post my findings. At long last (to my satisfaction at least), the answer to what exactly happened to Mr. Pink during the closing moments of Reservoir Dogs.

I don't know if anyone else has attempted to make and post a transcript of the exterior noise and dialogue from the moment Mr. Pink exits the garage, but here's my version. For the sake of accuracy, I went back and forth over these last couple of minutes on laserdisc, pen and pad in hand, fiddling with the amp dials to get the clearest sound possible. I only took note of distinct sounds and voices. All the following dialogue is confirmed as accurate. Yes, some of the dialogue IS lost under the main narrative voices of Harvey Keitel and Tim Roth, but you can make out plenty of what's happening outside if you listen real close (as I did with my bionic ears).

There are four sound files available containing the sounds from the movie, amplified 400% so it is easier to hear the dialogue in the background. Just click on the links in the transcript below.

SOUND - car door (Mr. Pink getting in a car)

SOUND - engine (He has trouble getting it started)

Sometime during this shoot out, Mr. Pink's car apparently gets stopped because the next thing we hear is cops, guns obviously trained on him, shouting.

The cops apparently don't have a real clear idea what they want him to do, or in what order, but it sounds like they've got him. The next line confirms this.

Oh no, not even the super-cool Mr. Pink gets through the movie unscathed. Rest assured, though, his wound doesn't sound too bad. In fact, he sounds more pissed off than wounded.

At this point, Mr. White's moaning over Mr. Orange's admission completely obscures what's happening outside. After he quiets down a bit, we can hear more...

The cops are still shouting, but they sound a little calmer, like Mr. Pink is complying.

If they're asking him this, it's safe to say they've got him unarmed, out of the car, and on the ground. The final bit of dialogue caps it.

COP - "Get your hands behind your back!"

On go the cuffs, and poor Mr. Pink gets to take the rap for the pile of bodies produced that afternoon.

One other thing I'd like to add is about the three-way shoot out. I remember there was a lot of debate about this one, especially about who got Eddie.

After going through the shooting a dozen times, I can confirm that Mr. White DOES fire twice, killing Joe, then Eddie. I WOULD say, however, that Harvey Keitel doesn't alter his aim quite enough to get a clean shot at Eddie. This is, I would say, a slight error in the action rather than a goof of logic.

And despite what the FAQ says, I'm pretty sure Eddie shoots Mr. White only once -- the gut shot.

September 01, 2008
One has to be lacking in hearing and good judgement to not know what happened to Mr. Pink after he had left the garage. I did'nt need amps or any other special equipment to know this, but whoever put forth this effort did some interesting work. He left, tires screeched, sirens sounded right away produced by the police cars stationed outside waiting to move in (why they did'nt move in when Joe got there is beyond me, Freddie assured Marvin that was when they were gonna move in), we then heard gunshots, followed by authoritative shouting, Mr. White takes out Mr. Orange after the admission, the cops take out Mr. White.....then the lime's in the coconut!

September 02, 2008
Back again, I had forgotten to comment on who shot Nice Guy Eddie. When I first seen this movie....I was saying to myself, "Why the ^$%# did Eddie fall? No one had a gun trained on him!". I rewound and discovered that Mr. White did indeed fire his gun twice but, he fired the second shot too low for where Eddie's wound was, which was is in his chest as was shown as the camera panned over the results of the mexican standoff. Nonetheless, Mr. White takes them both out.....Joe shot first though, so what's puzzling me is why Mr. Orange was still alive to make his admission! I guess he missed, who knows?

January 17, 2009
One: Mr. Pink shot Eddy from under the ramp, then he took the diamonds went outside and...
Two: As the cops pull in, you hear numerous gunshots, then the cops enter, Mr. Pink loses.

January 17, 2009
One: Mr. Pink shot Eddy from under the ramp, then he took the diamonds went outside and...
Two: As the cops pull in, you hear numerous gunshots, then the cops enter, Mr. Pink loses.

(Respect to the OP.)

September 24, 2012
Funny that he criticized many for having poor hearing...because he missed something big.

Well, obviously, he gets caught - didn't get away nor was there a shootout.

Why didn't he get away? Listen closely; Mr. Pink can't start the car. He tries several times to turn the engine to no avail.

Then there's a very long violent struggle to get him restrained (you hear both cops and pink yelling back and forth). Then the cops bust in.

1. Eddie gets shot while have his arm perpendicularly to the body with gun - so - it would be almost impossible to shoot him right in the middle of chest - at the line height of his arms, from Mr. Pink position.

2. The ramp itself. Eddy is standing at the end of it. If Mr. Pink did this, he would have to had his gun right on the ground pointed up towards the chest and miss the arm (.... incredibly hard shot)(He was about 10-15 feet from Eddie).
Yes he's crouching out beneath the ramp, but the shot itself would be miracle.
More likely the bullet would hit the side of lung/stomach.

3. There are 2 shots from Mr. White.
The first one is obvious, the second one is (in my opinion) for the Eddie, but in scene - gun points to low towards the floor during fire - but isn't as low - kind a match the angle (just like symbol "+/-" you know what i mean).......... lucky one? (or this detail in last scene has been just missed from Mr. Tarantino's eyes? - that would be sth new...)

December 19, 2014
In my mind Reservoir Dogs will always be the prequel to Pulp Fiction.

February 28, 2016
I saw this when it first came out ... Just watched it again on Elrey channel145.....I love this movie after reading this I finally understand the ending totally! Thanks for posting!

March 30, 2016
Mr. Pink does get away , scott free , with the coin . What you are hearing outside goes on after Mr. Pink got away . They only assumed Mr. Brown was dead , but he wasn't , and he showed up at the rendezvous , a wounded mess , just like he was supposed to . It is Mr. Brown the cops are busting outside the warehouse , not Mr. Pink . That's how it happened in the movie I saw .

May 24, 2016
Why couldn't Eddie have shot white? That would have ended it. There was no gun on Eddie. Was not a Mexican standoff. Don't say pink BC pink wasn't in the dialogue and Eddie would not he been thinking about him let alone that he'd be covering white...

June 13, 2016
I know this is real old, but fuck it. The thing about Quentin Tarantino movies is that he leaves whatever you want to imagination... just like Pulp Fiction (with what's inside the briefcase). I really think that Pink was shot and arrested, after shooting Eddie from under the ramp. Mr. White had no way of shooting him. All in all, it's left to whatever the fuck you want to think. He has said that multiple times when asked about his movies.

September 18, 2016
It can't be a prequel to pulp fiction they say marcell got 20 yrs in the beginning
Displaying all 14 Comment