Who was Brett Anyway? 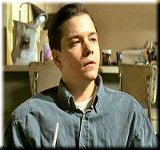 About the only thing that sticks with me as terribly incongruous about Pulp Fiction is wondering what exactly were Brett and his buddies doing with the apparently very valuable property of Marsellus Wallace. They come across like a bunch of not terribly competent college kids, way out of MW's league.

So what was he doing having Brett and his buddies even working for him in the first place not to mention holding that briefcase?

My best guess is that Brett's house is where Mr. Pink stashed the diamonds after the heist in Reservoir Dogs. I guess Brett made some arrangement with Marsellus to return the diamonds and then tried to screw him.


This theory presupposes a couple of things: 1. Joe knew Marsellus and was working with him. And 2. that Mr. Pink somehow knew Brett (perhaps a cousin who happened to live close by ?)

I realize this is a stretch... but it's how my mind makes sense of things. Would be great if someone asked this question to QT.

August 12, 2014
Brett clearly has seen Marcellus, we assume that they've been introduced.

I don't think Marcellus would waste much time with them either.
Instead, he would have someone like Tony Rocky-Horror handle the "business" they share.

We know Marvin is the inside man, a spy who works for Marcellus. In error, Brett trusts Marvin, who must have been with them all night (it's 07:30 when they are shot). Since it makes sense that Marvin was hiding out with them over night, he could have left to get burgers and made the call to Marcellus about being able to let them in the apt at 7:25. (Marvin unlocks the door)

We don't know why Tony was tossed off the balcony, but we know he has a speech impediment.


Maybe Brett and the the suitcase ARE the reason?

Imagine Tony Rocky-Horror gave the case to Brett (who knows why, day dreaming about Mia's feet?), who, along with his buddies (Marvin included) ,then vanish.

Tony's mistake is uncovered, and he is tossed from the balcony, but the case is still lost. Grapevine talks.

Marvin, being loyal to Marcellus calls in the location when he's out getting breakfast at Big Kahuna Burgers

Vincent and Jules get the call at 7am from Marcellus to be at Brett's apt at 7:25am, which doesn't leave them time to get shotguns.

When they arrive at 7:22 they have to hang back so they can be sure Marvin will answer the door.
During this short period we learn about Tony and Mia. All of which is a wonderfully non-linear way of getting to the Tony Rocky-Horror story, a story which might wrap up just as Vincent's Malibu is being keyed by Butch.

So Marcellus didn't trust Brett with a thing, but did trust Tony Rocky-Horror, fucked him like a bitch.